(Originally published in the journal, When Women Waken.) 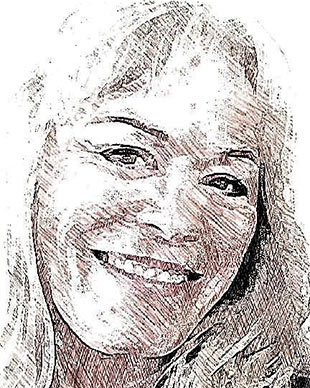 I go to the hills of North Carolina to get away from city life and experience a lesser spinning of the world. I leave the fast-paced blur of town and enter a hodge-podge collage of different looking people and clean smelling air with a fraction of the suburb’s noise.

At the cabin on the river, rusted-out trucks sputter by, grinding gears as they approach the Mitchell River bridge, headed toward Haystack Road. Most of the locals like to pause and gauge the mood of the Mitchell—maybe it’s time to cast a line if the trout are running high.

Or maybe it’s just time to park, get out, sit on the fallen tree and sip a cold one—think back to better days when their bellies were ripped in six pack abs and their arms popped with steel biceps, both gained from those tree cutting days when they could still see to their women who had not packed up the kids and left yet because their man had turned to meth or pot or shine—back when he could still provide for his family, keep them safe through the ice storms in the dead of wintertime. “Remember that storm in 2002? Everybody froze their asses off.” I hear that often at the country store where cold beer’s cheap and lies are so forgiven.

Some come to the river and spill out sadness, but the river doesn’t care. It washes downstream to the next river and the next, then on out to sea. The river has no time for woes, its own or others’. It just keeps on moving on, but I like the fellows who visit and leave no trace of themselves, no crumpled cans, no meanly trampled cedar vines, no butts of any cigar.

I like the gentle fellows who come out, needing the peace of the river and the woods. It’s not that these folks leave nothing exactly; they exchange bits of their kind temperament for the peace they receive. They send sighs of contentment downstream like little brave sailors boating toward the bend where boulders jut out like the knees of a sleeping giant.

I like to think the river loves visitors who speak aloud their admiration for its white-capped waters and the ones who skip little stones across the girth of her wide hips, where lazy sunlight kisses easy water, where round-stone eddies make a certain peace that you cannot help but want inside yourself. You can stand in the river and breathe its breath, be surrounded by the mist rising from it all year long. The river is alive and speaking its watery tongue. Just keep on moving on.

December 2014, I walked into the river’s breath and hid a bad piece of jewelry given me by a man who said the black moon in the middle was a sign of his empty heart. He told me I’d filled that hole for him, and as a remembrance of that, the necklace should be mine. Funny, I cannot recall ever doing that for him, and though his desire to give me the necklace was minimally confusing, it was also identical to the noise of the city to me, its rush and hustle, its frailty and fray.

The river raced high the day I entered its breath and sank my feet into icy water. I hoped to find the right stone under which to secure the dark moon necklace that I did not want. I hoped the river could wash it clean. I would leave it for a spell and return it to him bad-free. This is how I believe, and this is how I know things to work.

I piled river rocks on top of the bad jewelry and said words for it, for him, and for me, and as I came to an ending, the peace around me exploded with the snap of a large branch. I turned to see a full-grown doe positioned no more than five feet behind me in the rhododendrons.

Her nostrils were flaring and collapsing, her ears set to twitching, her tail erect and unmoving. I blinked. She did not. Instead, she lowered her head, and I was stunned by her beauty, sky and river reflected in the dark of her dark brown eyes. She took two steps back and disappeared into the woods. I began to cry.

I can’t say exactly why I cried but I probably don’t need to. Everyone knows how to hold feelings in, how to bury them until dry eyes are but a thing of habit, a brick in the foundation, half of the equation’s equal sign = and it doesn’t matter whether it’s the top dash or the bottom dash—either way, it is a minus that we don’t cry for the sake of crying, for the honor of it, for the joy of it, or just because we can.

My tears came without forbearance that day in the Mitchell River. There was no shame about crying, no inhibition, and then the strange transition: I became a fellow of the river, like the ones I so admire who leave no trace of themselves save the peace and goodness that is born from a certain solitude found in a lesser spinning world, where instead of dark moons growing in the center of your stone heart, there are wild deer and rivers that whisper, just keep on moving on.